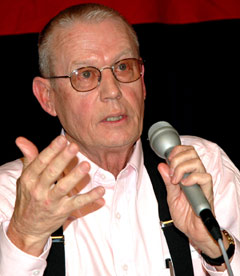 The Farmworker Movement Documentation Project, founded in 2003 by LeRoy Chatfield, is a labor of love. The project seeks to compile and publish primary source accounts from the volunteers who worked with Cesar Chavez to build his farmworker movement during the period, 1962-1993.

The first publication of the Project’s publishing arm, Si Se Puede Press, is a Multimedia Presentation of the documents collected by the Documentation Project during the first two years of its existence. Future publications include an Internet Website, and a limited edition book of essays written by farmworker movement volunteers. As the need arises, and the opportunity presents itself, additional publications will occur.

For a more detailed discussion of the origins, and the development of the Documentation Project, please consult the essay of LeRoy Chatfield, 1963-1973. Also see Mr. Chatfield’s other essays by clicking here.