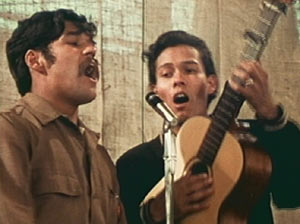 The Documentation Project is indebted to the creative work of former UFW volunteers Alfredo Figueroa and Terry Scott for recreating the songs of the farmworker movement, especially from the 1960s and 1970s.

With the technical assistance and studio work of Mark Day, Wayne Reese, and Ted Esquivel-and the musical and talented Figueroa Family-Alfredo Figueroa has produced a recording of 13 songs for the Documentation Project. Not to be outdone, Terry Scott, with the technical and studio assistance of Jim Scott- and a group of dedicated and musically talented UFW volunteers- also produced 13 songs, including one she wrote after she left the movement.

As you will hear, their musical presentations are quite different, but their interpretations are equally authentic, and accurately reproduce the songs that were sung at the Friday night union meetings, the farmworker rallies, on marches, at boycott planning conferences, at religious ceremonies and funerals, and, of course, at celebratory occasions like weddings and social occasions.

Steve and Peter Jones also contributed to the Documentation Project their original song from 1976, “The Gallo Song.”

No introduction to the music of the farmworker movement would be complete without acknowledging the enormous influence and creative force of Luis Valdez and Agustin Lira, founders of El Teatro Campesino in 1965. Much of the music presented in this section owes its existence to the creative genius of these two pioneers.