The Farmworker Movement Documentation Project pays tribute to Helen Chavez with an essay written by LeRoy Chatfield and selected photos from the Website.

Former UFW Volunteers/Supporters who knew and worked with Helen Chavez are invited – and encouraged – to submit essays and/or photos for publication in this Commentary section. 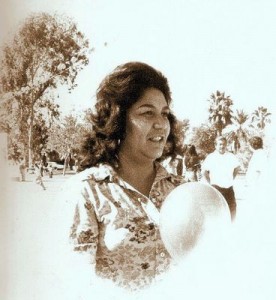 The Cesar Chavez Service Club of San Diego founded by Carlos & Linda LeGerrette sponsored a “Tribute to Helen Chavez”. What a wonderful idea, and long, long overdue in my estimation.  This Tribute has sparked me to publish this essay, along with selected photos, in the Commentary section of the Farmworker Movement Documentation Project. Thanks to Carlos & Linda for sparking the idea.

This will come as quite a shock to you – even I have difficulty believing it – but at one time in my life I was a young man.

It was during that time that I met Helen Chavez. She was a few years older than me, the mother of eight children who ranged in ages from 16 to 6, and she was the wife of my best friend.  Forty-five years later, I write  the Helen Chavez I know and admired.

I remember the day I walked into her small two bedroom house in Delano  to visit her husband. The house was spotless. Hospitality was extended. Her children were well-mannered, courteous and respectful to visitors like me. I knew immediately that in this family – and I include her husband – Helen Chavez was the no-nonsense organizer- in-chief.

There was no TV, I don’t remember a radio, and there was no telephone, washer or dryer. Helen and Cesar had no bank account. Cesar owned a small Volvo, but Helen did not drive. And if you can believe it, after the Volvo expired in late 1966, they never owned another car.

Cesar and Helen Chavez, along with their children, lived a life of voluntary poverty because they wanted to be free to dedicate their lives to organizing and helping farmworkers. 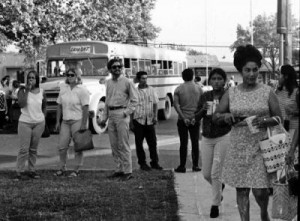 In keeping with the spirit of the Documentation Project,  in this essay I use two primary sources: first, Kathy Lynch Murguia, an 18-year volunteer with the farmworker movement, and Bonnie Burns Chatfield, an 8-year veteran.  Kathy and Bonnie have written essays about their time with the United Farm Workers, and in them they include their experiences with Helen. These essays are published on the Website. Kathy Lynch Murguia  Bonnie Burns Chatfield

“I moved from the marginal chaos of a volunteer house to the Chavezes’ small, two-bedroom home on Kensington Street. The children were special. When Helen was absent, Sylvia, Linda, or Eloise was in charge. They seemed to be always cleaning and keeping the younger children in line. The sleeping arrangement was novel to me. Bobo, Birdie, and Titibet slept in the front room on the floor or the couches. The older girls (Sylvia, Linda, Anna, and Tota) slept in the other bedroom. Fernando slept in a covered porch area at the back of the house. The younger ones would compete for the couch. . . when I moved in, I got the couch. I have great memories of my stay with the family.”

“I spent a lot of time at Cesar and Helen’s house on Kensington—a tiny two-bedroom cottage that housed eight children and all kinds of guests—room for all, pots of food on the stove, and repartee and laughter all the time— especially when Cesar was gone. I felt completely at home.”

“Helen was my surrogate mother. If I had a “baby” question, I called Helen. Sylvia and Eloise were my primary babysitters, but more like younger sisters for me, beloved aunts to our daughter, Clare. We had fun, and they could always make me laugh. The Mexican women with whom I lived and worked were loving, patient, and generally relaxed mothers. I’ve looked back and been grateful for their influence.”

“During this time I became good friends with Helen Chavez. I wanted to teach her how to drive. I thought it was a strain to take care of all the things she had to do–going to the picket lines in the mornings, working full time, and managing her family’s needs. I often came over on the weekends to give her rides or to go shopping, where we looked for specials on hot dogs or hamburger meat.”

At the same time I became part of the office crowd, which included Esther Uranday, Helen Chavez, Fina Hernandez, Donna Haber, and Donna Childers. What a group. Helen, Cesar’s wife, was in charge of the farmworkers’ credit union. Her frank honesty and warm regard for others immediately drew me to her.”

(1) managing the family; (2) going to the morning picket lines; (3) working full time managing the credit union; (4) shopping on weekends for specials on hot dogs and hamburger; and (5) mentoring other women. 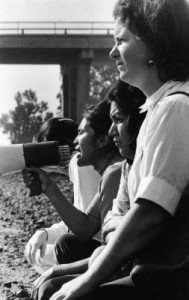 You talk about hard work?  About being organized? You talk about bandwidth or multi-tasking?  How on earth could Helen Chavez manage all this?

But there is more! Add 45 years of marriage to the same person,   especially if that someone is a Time Magazine Man of the Year  international celebrity who leads 300 mile and 1000 mile marches, is jailed for a month in Salinas, travels throughout the United States and Canada for months at a time to raise funds for the cause and to promote the farmworker boycotts . . . and who periodically fasts publicly for a month at time during the course of your marriage.

Living a life of such intensity and demands took great talent, dedication and commitment – and, yes,  maybe a little party-time too.

Every couple of months, with Helen, her sister Petra, Kathy M., Esther, Fina, and many other women, we had a ladies’ night out—a beer party. “Don’t tell Cesar that I smoked,” cautioned Helen. God, did we laugh. About everything.  My sides ached the next day. 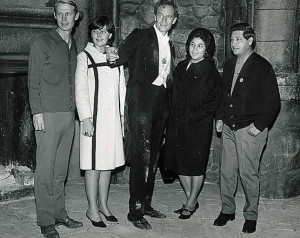 Helen Chavez is the only woman I know who was arrested and jailed for three days for shouting “Huelga!” on a farmworker picket line, had her picture taken with Charlton Heston, became close friends with Ethel Kennedy, had a meeting with the president of the United States, and a private audience with the Pope. 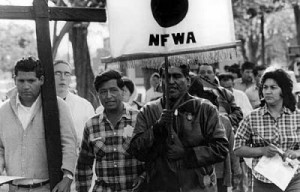 In the program for the “Tribute to Helen Chavez”, it is written: “Without Helen by his side, Cesar Chavez could not have devoted his life to the struggle for social justice for farmworkers. While she never spoke in public, her steadfast and loyal presence was felt throughout the length and breadth of the farmworker movement.”

What I write now will never be found in a book, or in a documentary film or in any scholarly discussion about Cesar Chavez and his farmworker movement – but it is true! – so I ask you please, if you remember nothing else about Helen Chavez, please remember this:

First: women were the backbone of the farmworker movement and it is these women who looked to Helen Chavez for inspiration, modeling and guidance; Second: Helen Chavez was a full partner with her husband in the creation and development of the farmworker movement. She was not a passive participant or a spouse who simply tolerated the fulltime missionary work of a husband; she understood the need and she fully complemented the role of her spouse in their joint struggle to achieve social justice for farmworkers.

Let me give you one, very concrete example of what I mean:  In 1968, during Cesar’s Fast for Nonviolence , farmworkers began to arrive in Delano from all sectors of California, Arizona, Washington and Texas – at first you counted their arrival by dozens, then by hundreds,  and finally by thousands.  They came because of the Fast, they came to meet Cesar Chavez the founder of the movement, and they came to pledge their support to him. 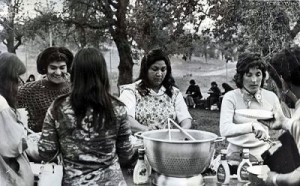 So, while Cesar Chavez was fasting and depriving himself of food for the sake of promoting nonviolence in his cause, Helen Chavez was spending her entire day preparing and cooking food to feed the hundreds and then thousands of farmworker visitors who came to Delano. She took charge: she organized the wives and daughters of the Delano strikers, the visiting farmworkers and volunteers into a workforce that converted the few loaves and fishes into a full course evening meal for the multitudes every day of the Fast.  These women were empowered by Helen and were swept up into the wake of her commitment to social justice for farmworkers, and her willingness to sacrifice for it.

In the course of writing this piece, I have been trying to find a word  – or maybe, two words – that best describe the Helen Chavez I know.

The words I have chosen are: noble and woman. Helen Chavez is a “noble woman”. She carries herself with poise and great bearing; she has presence; she is gracious, approachable and generous; she is blessed with God-given good common sense, and above all, she was fiercely loyal to the work of her husband.

In short, Helen Chavez is a noble woman . . . and she puts the rest of us to shame. 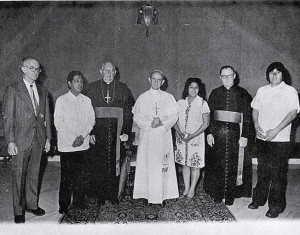 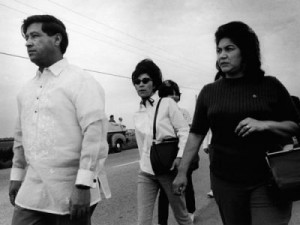 Patty Park writes: “Helen made everyone feel they belonged. They were family. She was feisty and her irrevence about Cesar – treating him like a regular person made it so easy for all of us to do our work. She included you immediately in the circle of the union and the family. I remember Cesar, when I was at La Paz, talking about children and the importance of nurturing them and Helen’s interjection about him never having changed a diaper. It was wonderful because it was done with such love, but told us all it is OK to speak up when you think you have something important to say to him. . . Thank you for doing this wonderful tribute and to Linda and Carlos LeGerrette as well.

Father Ken Irrgang writes: “What a marvelous tribute you accomplished honoring Helen Chavez! I would loved to have heard your speech when it was given – although reading this tribute was incredibly rewarding. Thanks!“

Marc Grossman writes: “Thanks for this report about the tribute to Helen Chavez. As part of my writing project, I have more than 600 pages of transcribed interviews with Helen. It took a few years of family members convincing her to tell her story; she’s never really spoken at length with a writer. As you know, Helen is a genuinely modest and shy person. Although at first she was worried about remembering dates and events, and was reluctant to discuss policy or issues – ‘that was Cesar’s business’, she’d say – it’s remarkable what she remembers, what only she knows as well as her own up-from-poverty personal story that closely parallels Cesar’s.“

Olgha Sierra Sandman writes: “Your article about Helen Chavez is so sensitive. What a wonderful human being she is! Thank you for sharing with all of us.“

Alex Reza writes: “A beautiful tribute to Cesar’s ‘full partner’ in life and in La Causa. A much needed documentation of Helen’s part in the farmworker movement. I always felt that Helen does not get enough credit for her good work supporting Cesar. I had the pleasure of speaking with her for a few minutes aabout six years ago. I told her I read about her being arrested for shouting HUELGA! on the picket lines. She reminded me that she had been arrested three times.” 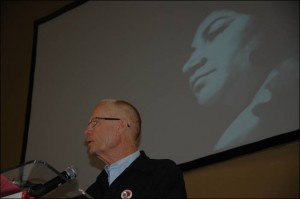