BOARD OF TRUSTEES – Statment of Purpose + Photo 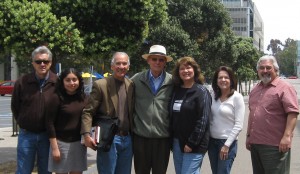 “On Saturday, April 17, 2010, at a meeting organized by UC San Diego professor, Jorge Mariscal, the first board of trustees of the Farmworker Movement Documentation Project (FMDP) was formed.  The new trustees agreed to preserve, develop, and expand the FMDP by creating a new non-profit organization dedicated to that purpose. The trustees also voted to expand the board to include others who will be needed to increase the FMDP’s availability to all levels of education and to other organizations interested in Cesar Chavez and his farmworker movement.” – LeRoy Chatfield, Founder/Director of the FMDP

STATEMENT OF BOARD OF TRUSTEES

“As the Board of Trustees for the Farmworker Movement Documentation Project (FMDP), we are committed to safeguarding the content and founding spirit of the FMDP so that future generations will understand and appreciate the significant history of the farmworker movement.

Our principal goals are to continue to expand the archive and make the source materials available to students, teachers, scholars, artists, writers and the general public in a manner that honors the legacy of all who made La Causa a compelling movement for social change, empowerment and pride.

We are honored that LeRoy Chatfield, the creator of FMDP, has granted us his trust, and we dedicate ourselves to growing and protecting the FMDP out of respect for the legacy of activism that informs it.”

Filed under: BOARD OF TRUSTEES - Statment of Purpose + Photo,COMMENTARY — LeRoy @ 9:09 pm