Seventy photos created by Jon Lewis – and selected by LeRoy Chatfield – that illustrate his ironic sense of humor and appreciation of paradox. He juxtaposes two separate and distinct images in order to project a new message. Photo captions were written by LeRoy Chatfield. 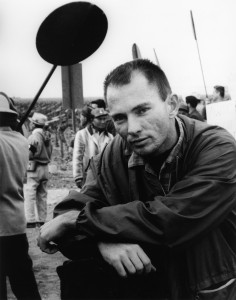 Asked once by a moderator during a roundable discussion what he did, Jon Lewis replied, “I create photographs”.  Indeed, he did. During 1966, he created more than 2500 photographs of Cesar Chavez and his farmworker movement. Between 2004 and 2009, I published more than 1700 Jon Lewis photos on www.farmworkermovement.us , which may be found in the Photo & Art section in the Jon Lewis Gallery. After Jon’s death in December 2009, his entire portfolio was transferred to the Yale University Beinecke Library of Rare Books and Manuscripts and should be available to scholars and the interested public by late 2011.

The 70 photographs I have selected for  “Juxtapose” illustrate Jon’s special talent for sizing up a scene, noting  irony or paradox, framing the image, and shooting it, but he had to be quick about it! The marchers were marching, the pickets picketing, nothing stood still – he knew what he was looking for, he anticipated the shot, recognized it, framed it, and shot it.

The first panel – “Young Student Volunteer + Elderly Delano Striker” offers a good example of what I call “juxtapose”.  The two persons, at least 50 years apart in age, are entwined in one tightly framed shot. Call it contrast, or irony, or paradox, or a sense of humor but I call it a juxtaposition of images to create a new message.