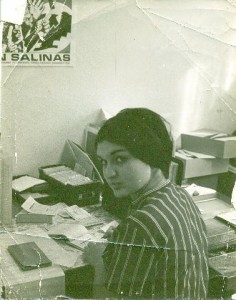 I began working at the Farm Workers Credit Union in the summer of 1967.  I was “just seventeen”, a striker’s daughter, and working again during high school summer break at the Pink House in Delano answering the phones for Cesar’s secretary. Needing a break, I went around to the backside of the house to visit with my childhood buddy, Idalia (Lali) Escamilla.  Things were slow at my desk so I asked her if I could help her in the Service Center.  She remembered that I knew something about bookkeeping. She told me Helen Chavez needed help in the credit union.  Helen was well into the second month unable to post anything into the current month because she could not close-off the previous month books. She was off by seventeen cents.  Could I help her?  I found the discrepancy one-fourth of the way into the shares ledger.  The previous month’s ending balance had not been posted correctly into the current month beginning balance.  I subtracted the two figures and it was off by seventeen cents.   Bingo!  I found it but I also found myself working at the credit union for many, many years after that—all because of seventeen cents. Helen was grateful, “I’ve been pulling my hair going crazy!”  She was tired, long hours, eight kids, Cesar to do things for, and hardly anyone to help her what with the workers coming in and out of the office all the time. How did she ever manage? As I soon learned, a lot of people may have given themselves all the credit or taken it without asking, but it was Helen who did most if not all the work. If I learned anything from her in all the years I worked with her it was this—learn to do four or five thins at once and take good care of other people’s money because their life depends on it! 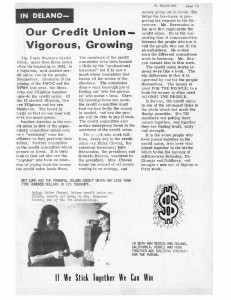 Cesar Chavez had great confidence that cooperatives and credit unions could serve as a means to empower people.  He and Helen, his wife, had worked for the Community Service Organization (CSO) in the fifties and early sixties.  The CSO helped bring improvements by tackling problems in Hispanic communities.  Cesar experienced first-hand what it meant to organize others to work cooperatively to bring improvements to their lives and to their communities. It is my understanding that during this time he promoted the idea of credit unions. It is no surprise then that Cesar would desire to carry the idea of coops and a credit union to the poorest most neglected population when he began his work organizing farm workers into a union—united in their efforts to take control of their own lives—fighting for decent wages, improved working conditions and essential benefits sorely lacking to them. Cesar’s idea, too, of a credit union of their own would enable farm workers to finally be in a position to help each other financially.

A credit union for farm workers—a group of people with a common bond helping one another—was an entirely new concept to most workers. From the beginning, Cesar believed in service to others and credit unions fit that ideal of farm workers serving and helping each other. The philosophy of credit unions, “not for profit, not for charity, but for service” was strikingly similar to the values formed, practiced and advocated by Cesar not only at the start of his organizing work but throughout his lifetime—“sacrifice, determination, and service to others”.

During those early union organizing days, Cesar presented his vision for a credit union to farm workers in one house meeting after another. It would be a far better way to improve the current situation they were in— dependent on growers or those in power for their help that only served to sink them deeper into financial misery and ruin or enduring times of extreme hardship because they were deemed a credit risk to financial institutions who rejected them when they applied for help to pay for vital necessities or unexpected expenses such as health care emergencies. 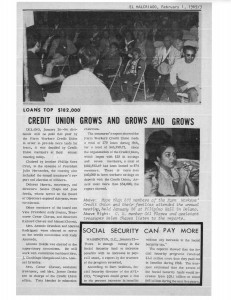 Cesar was aware that while some farm workers appeared to warm up to the idea of a credit union others had misgivings.  Cesar would tell workers that their money deposited in banks was being used by the growers to pay them the cheap wages they received. Little by little the idea began to take shape that a credit union was a good thing to have.  Reluctance was replaced by acceptance. The reason some had resisted Cesar is because money is a very private matter not usually discussed with others.  While some farm workers did use banks, it was also well-known that a larger segment kept their money in what they believed to be safe places at home (in tin cans, stashed in jars and buried in a dirt hole, inside a mattress or the secret pocket of a coat to list a few) and quickly accessible when needed. Therefore, after gaining their trust, Cesar Chavez went ahead with a few other farm workers and founded the Farm Workers Credit Union. It began with $35 in savings and seven members. For help Cesar also tapped his brother, Richard Chavez (a home builder by trade) who agreed to use his house as collateral to get a $3,700 bank loan which Cesar used as additional start-up money for the credit union. Soon the credit union was up and running. The Farm Workers Credit Union was a reality.  Cesar continued to use the credit union as an organizing tool to bring more and more workers to into the union.

Members of a credit union unite to help one another through their own financial institution.  It is a not-for-profit cooperative which is owned by the members and is operated by a membership elected board. Also, committees are elected to monitor the day to day functions and to audit all credit union financial records. Members of a credit union are not shareholders as in other financial institutions because they are not owned by outside stockholders or controlled by paid boards. The credit union also pays a dividend to its members (from interest received from loans throughout the current year) and offers lower interest rates on loans. The Farm Workers Credit Union did not charge service fees or late payment charges and only a small one-time membership fee of twenty-five cents was required when one joined. Shares were five dollars and an account could be opened with one share. Because of the transient nature of their job, a credit union like the Farm Workers Credit union provided the service that the members needed that generally was not available to them by other financial institutions i.e. small low-interest personal loans for medical bills, auto repairs, household appliances, weddings, funerals, and Christmas gifts, etc.  The Farm Workers Credit Union offered 1% interest on the unpaid balance on loans and there were no late charge fees applied. This made a real difference in the lives of its members because it was tailored to fit their particular needs.

CUNA Mutual’s motto The Debt Shall Die With The Debtor” was declared when they developed a Loan Protection Insurance policy.  A short time later, they also provided a Share Life Insurance policy.  These loan and share policies provided for a decreased compensation based on age to the beneficiaries of the deceased credit union member.  These were very attractive features to farm workers.  This is how it worked.  If you had a loan and died your loan was automatically paid-in-full if you were fifty-five years of age or younger.  The amount decreased by a certain percent at age 65 with zero compensation at age 70. This provided a great service to the member that a co-maker (“co-signer” or a spouse) would not be left with the debt—“The Debt Shall Die With The Debtor”.

The other feature that members appreciated was that if you died the money in your share account would double if you were fifty-five years of age or younger.  Again the amount of the compensation would decrease by certain percentage points depending on your age with no compensation at age 70. As an example, if a member was 40 years of age with a loan of $250 and shares totaling $400, upon his death the loan would be paid off and the beneficiary would receive $800.  Nobody wants to die but nobody wants to leave a spouse strapped to a debt either. It was sad when a credit union member passed away but nothing can express how it felt to be able to hand a check to a family member for double the amount of the savings in their loved one’s passbook. What a great help during a difficult time.  Looking back, these were defining moments that farm workers never forgot. Not a lot of talk they had heard over and over from others.  No show, no press coverage; but farm workers thanking Helen and wanting to talk to Cesar to thank him, too.

Understandably, as more and more workers were approached to join the union they needed convincing evidence of how a credit union would benefit them, what it had to offer and how it would function as a business in order to fully accept the idea for them to turn over their hard-earned money. Cesar was organizing a union that would most likely require a strike. .It is difficult during the long winter months to survive on what little money is squirreled away from the summer harvest.  How could workers be expected to endure a strike during the summer harvest season then have no money for the harsh winter months that follow?  The credit union was to serve their needs in two ways.   First, it would met their immediate need for a secure place to deposit savings or if needed, to borrow money at a low-interest rate.  Second, the credit union would be firmly established for members to help each other during a difficult strike.  Cesar’s organizing focus in the early ‘60s was to build the union for an anticipated strike some ten years down-the-road.  A strong functioning credit union at that time would alleviate striker’s concerns about being caught unprepared financially. 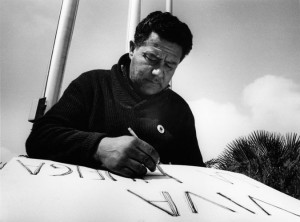 At their annual meeting in 1969, the Farm Workers Credit Union reported that $183,000 dollars had been loaned to 874 members since its inception.  The United Farm Workers Organizing Committee (later UFW) union was in the third year of a strike— a strike that happen earlier than Cesar anticipated—and a grape boycott underway nationwide.