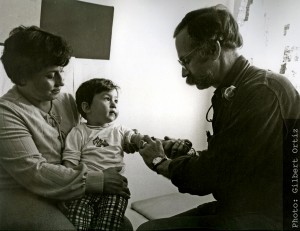 (Al Krebs, a reporter with Religious News Service, was in Delano to cover the U.S. Senate hearings in 1966).

The last witness to testify before the Senate subcommittee was Dr. Jerome A. Lackner, a physician from San Jose, California, engaged in the practice of internal medicine. Lackner had been one of the doctors who had helped staff the Delano Free Medical Clinic. Along with a full-time registered nurse—Peggy McGivern—and Marion Moses, who served as volunteer nurse after having been head nurse of the medical/surgical unit at the Kaiser Foundation Hospital in San Francisco, they had maintained the clinic since October, 1965, providing free clinic care to both the NFWA and AWOC strikers. Medical and dental students from the University of California, San Francisco had also been assisting the clinic. Moses would later become a physician—board-certified in public heath and preventive medicine. Her interest in chemical poisons began with her work with the union, first as a nurse from 1966 to 1971, and then as the medical director of the National Farm Workers Health Group from 1983 to 1986.

Today, Dr. Moses directs the Pesticide Education Center, founded in San Francisco in 1988 to educate workers and the general public about the adverse heath effects of chemical poisons and the availability of safer alternatives. In addition to serving as a doctor to Chavez and the Catholic Worker’s Dorothy Day, she has also served on many government panels and committees, including the Environmental Protection Agency, the Veterans Administration, and the Toxic Substances Advisory Committee.

Lackner explained to the subcommittee that most of his examinations of patients in Delano had shown them suffering from respiratory tract infections and gastroenteritis, both of possibly viral origin and of longer duration than those patients he examined in private practice. He gave an example, however, of a more serious case and the inordinate obstacles faced by farmworkers.

“I was asked by the nurse to make a house call on a person who was unable to come to the clinic. The husband, who had just two days previously joined the strike, came to the clinic and asked us to see his sick wife.

“We followed him to a very nice, relatively newly built bungalow apartment. Not bad looking, I thought. It had a bathroom, a small living room, and a little kitchen. It would have been an ideal residence for a young couple without children. Inside, though, were a mother and seven children. The stench of putrefying, necrotic tissue filled the interior of the apartment. A baby of 18 months lay asleep on the bare floor in front of a blazing gas heater.

“The mother lay sick on the couch, She had delivered her seventh baby at home with the aid of a neighbor lady several days before I arrived. There was reportedly a considerable blood loss. She was pale and febrile, appeared very toxic, and had a profuse malodorous lochia, which she absorbed on towels stuffed into her underwear. She complained of lower abdominal pains and unquestionably was suffering from fulminant endometritis and probable puerperal sepsis. It was Christmas Eve; I wondered who would take care of the children when she died; the new baby was asleep in the crib.

“I called the county hospital and talked to the admitting resident; prompt evaluation and probable admission was concurred on. I phoned the emergency room four times in the next five to six hours before the poor man showed up at the hospital with his wife. Even then, it was hard for me to understand how it could take anyone so long. The next day he explained.

“He had to go to the NFWA office to get money for gasoline. He had to find a friend whose car would make the trip. He had to place the six older children with a friend who had seven children. Once in Bakersfield, he had to find the house of a relative with enough know-how to bottle-feed and care for the new baby, and then the relative pointed him in the direction of the hospital, which he had trouble finding at midnight, as he had never been there before. Fortunately, the patient responded well to what must have been technically excellent treatment and was later discharged to return to her family.”

As Lackner spoke of the inadequate medical facilities available to farmworkers, many in the audience thought back to the night of January 27 and the death of the NFWA’s San Francisco field representative Roger Terronez. The 32-year-old farmworker and former prize fighter had been fatally injured in a freak automobile accident near Delano.

Terronez, father of four children, was taken alive to the Delano hospital. Neither the type of medical care nor the doctors that he needed were available. He was unconscious for two hours as specialists were brought from Bakersfield 32 miles away. The Delano equipment, however, was inadequate, and an ambulance was called to take him to a Bakersfield hospital. He died en route.

Describing his relations with physician members of the Kern and Tulare county hospitals, Lackner was impressed with their interest and intent to provide proficient and prompt medical care for patients he referred in. He did not feel the same way about some of the paramedical personnel in the hospitals.

It was the same paramedical personnel that this writer was concerned about the night before the Delano hearings, but out of that fear came a demonstration of the giving humanitarianism of Lackner. In the process of covering the three days of hearings, I was accompanied by my then-wife and infant son, David.

The afternoon of the second day, he developed his first serious cold, and, being new and concerned parents, we were anxious about his condition. Originally, I had planned to stay with him and his mother in the Stardust in Delano that evening, in case his condition worsened. I remembered, however, that I had seen Lackner’s name on the witness list for the next day, and, knowing that the farmworkers were having a rally that evening, I decided to go to the rally to see if I could locate Lackner and get some advice on what we could do to relieve David’s misery.

At the rally I quickly found Lackner and after apologizing to him for taking advantage of his medical expertise at this late hour, explained to him David’s condition. He, being familiar with my coverage of the strike, didn’t hesitate a moment in writing out a prescription for me. After some searching I found a drugstore to fill the prescription and returned to our motel room. The medicine seemed to have some effect, but about 3 a.m., David awakened us with a terrible hacking cough, crying in discomfort.

Because I was fearful of how he might be treated if we took him to the local hospital, since by that time I wasn’t exactly appreciated by the Delano citizenry for my coverage of the strike, my wife and I worked out a plan whereby I would drive her to the hospital and let her take him to be examined, thereby not complicating David’s treatment.

She immediately bundled him up against the chill night air, and I went downstairs to warm up the car before we left. Descending the stairway, I met Lackner, who had just completed making some urgent house calls in the farmworker community. I explained to him that we were taking David to the local hospital since he didn’t seem to be getting any better, despite the prescription the doctor had given me earlier in the night.

Lackner, after listening to my concerns, told me to go back upstairs, get David undressed, and he would be in our room momentarily to examine him, which he did, and found that he was merely suffering from a bad cold with flu-like symptoms and gave us some medicine from his kit for David’s relief.

It was an act of kindness that neither my wife nor I would ever forget. Lackner later in the late 1960s and early ’70s became Cesar Chavez’s personal physician. In concluding his testimony before the subcommittee, Lackner pleaded that the senators speed legislation that would insure farmworkers those rights, protections, and benefits other American working people enjoy.

“I urge you in the health interests of the farm laborer to legislate to the effect that farm laborers have the right to federal minimum wages, to overtime pay, to sick leave, to unemployment insurance, to health, welfare, and pension plans, to the enforcement of child labor laws, to an intelligent, humane person-oriented rather than crop-oriented solution to the fact that some labor is by nature seasonal, and above all, to the effect that farm labor has the right and the duty to organize—the right to union recognition and to collective bargaining.