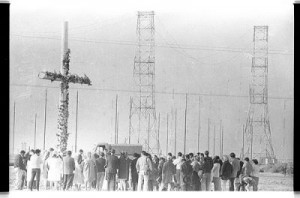 When I arrived in Delano – October 1965 – recruited by Cesar Chavez “to help me with the strike” I was surprised to learn that I was not going to help with the strike, but was being assigned to raise money to fund and develop farmworker cooperatives. Aside from knowing what the word “coop” meant, my page was blank.  Chavez was not dissuaded: learn all you can about coops and raise enough money to start a farmworker gas station coop. He did not offer any suggestions – do this, do that / go here, go there,  nor did he set any timetable. When I was ready, so would he.

Almost 50-years later, this farmworker movement assignment during my first hour in strike-torn Delano continues to amaze me. Cesar Chavez was committed to building something more than a union mostly concerned with wages and working conditions, he planned to empower communities of poor people – in this case, farmworkers –  by involving them in economic self-help programs and teaching them how to work cooperatively together for the benefit of the entire community. Even then, he was astraddle the philosophical divide: “are we a union? or, are we a movement?” that would simmer on the back burner until the late 70’s when the issue boiled over one last time and created a divide that could not be bridged.

Raising money to fund coop development also meant raising money to pay for my own transportation and keep.  I begged enough  money from former colleagues to purchase a new 1966 VW Bug (best car I ever had!) and lived with friends here and there throughout California to provide for my room and board.  By 1967, I was ready to move forward and open a Farm Worker Coop Gas Station.  Chavez was pleased.  As a first step, I created the National Farm Workers Service Center, Inc., a charitable, tax exempt organization,  to serve as the umbrella for the newly formed Farmworker Cooperative, Inc. and any other programs that might arise in the course of the farmworker movement. The new Service Center, Inc.  leased a vacant Texaco station on Cecil Ave and the first farmworker coop gas station was launched. 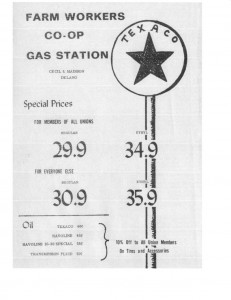 By the end of the summer of 1966 I was married and finished with my fundraising assignment. I purchased a single-wide 60′ mobile home and moved back to Delano to live at the NFWA strike headquarters – called Arroyo Camp – on the outskirts of Delano. My memory is vague about all the details, but  Chavez had expressed to me the need to find a piece of property for the purpose of  consolidating and relocating the offices of the National Farm Workers Association. I found – or perhaps someone turned me on to it – a 40-acre parcel not far from Arroyo Camp on Garces Highway, across from the Voice of America radio towers and adjacent to the Delano City Dump. I tracked down the owner, who lived in Alhambra and visited with her. After her husband died, she inherited the property, had no plans for it – in fact, had never seen it – and  was tired of paying taxes for a vacant parcel more than a 100-miles distant from where she lived. She agreed to sell the property for $5000. By early 1967, the NFWSC had become the owner of  a beautiful, but god-forsaken piece of property, that would forever anchor Cesar Chavez and his farmworker movement – or so we thought. 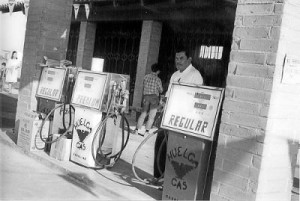 Not surprising, Cesar Chavez wanted the Farm Worker Coop gas station to be the first building built on the new Forty Acres, and it was to be built with adobe bricks with a California mission tile roof – cool in the summer, warm in the winter, he maintained.  Richard Chavez, master craftsman and brother to Cesar, shaped up a volunteer crew and the building was completed by the end of  1967.  In typical movement fashion, the first use of the coop building was not as a gas station but as the site of the first Cesar Chavez twenty-five day  public Fast for Nonviolence – February/March 1968. 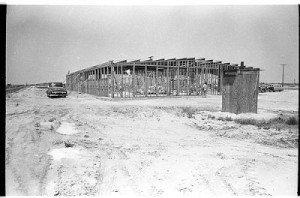 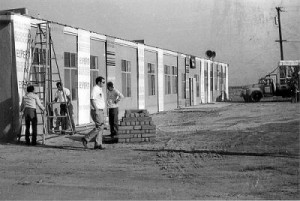 Thanks to Paul Schrade, the United Auto Workers put up $50,000 to pay for the construction of the new UFW office building on the Forty Acres. It would be called: Roy L. Reuther Memorial Building. Roy was the brother of UAW president, Walter Reuther. The dedication ceremony was September 14, 1969.

From the earliest days of the Delano Grape Strike in the harvest of 1965, the farmworker movement provided a health clinic for striking farmworkers. Peggy McGivern was the founding nurse and San Jose doctor, Jerry Lackner, volunteered his services on most weekends. The clinic was housed in a house trailer located at Arroyo Camp, the strike headquarters of the NFWA. 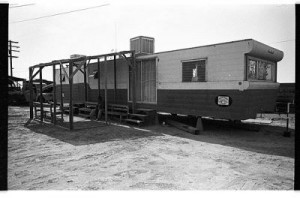 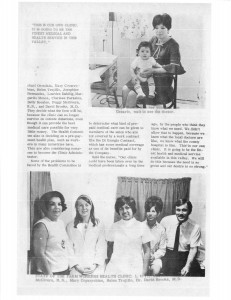 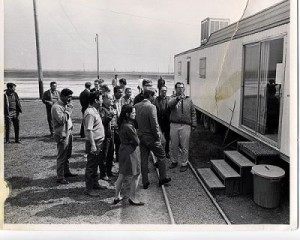 In early 1970, two large army style barracks were donated to the United Farm Workers and were transported to the Forty Acres waiting to be put to use. When plans for the new Farm Worker Clinic (to be named after Roger Terronez, one of the founding vice-presidents of the NFWA who was killed in a freak auto accident at the Arroyo NFWA strike camp) Richard Chavez decided to place these two barracks end-to-end to form the core of the clinic building and finish off the building with adobe brick walls and a mission-style tile roof.  The Terronez Clinic opened in late 1971. 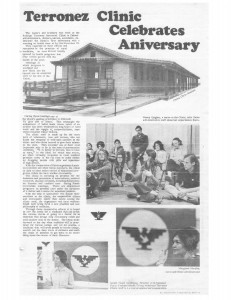 Cesar Chavez had often talked about his dream to build a retirement village for the aging Filipinos who were no longer able to work and after almost a decade of dreaming, it finally came to pass. In 1974 the Agbayani Village,  a 60-unit residential complex was dedicated.

The story of Filipino farmworkers in California is one of the saddest – and shameful – chapters in our state’s history. Starting in the 1920’s young Filipino men – really only boys – were recruited to come to the West Coast to work as farmworkers, cannery workers and house servants. Most came to California to work in the state’s largest industry: agribusiness.

Because of racial discrimination, these Filipinos were not permitted to marry white women, nor were they permitted to own property – in effect they were indentured servants or modern day agricultural slaves. These discriminatory laws were not removed until after World War II. (For more background about the plight of Filipino farmworkers: “Exiled In California” by Peter Stanley) 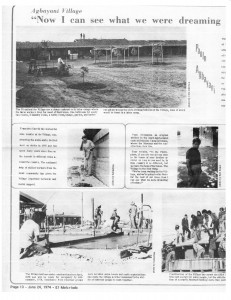 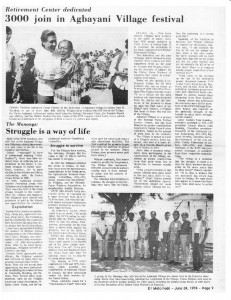 From 1967 to 1974 all of the construction work on the Forty Acres – Farm Worker Coop Gas Station, UFW Office Headquarters, Farm Worker Health Clinic and Agbayani Retirement Village – was accomplished by volunteers. An amazing testament to the charismatic leadership and organizational abilities of Cesar Chavez and his farmworker movement during the 60s and 70s. 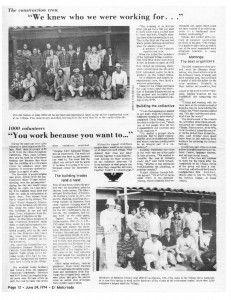